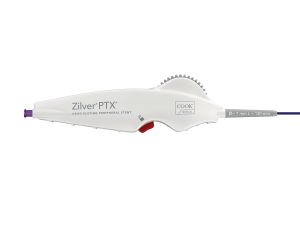 Limerick, Ireland — CE Mark has been awarded to the new rotating thumbwheel deployment system for Cook Medical’s Zilver® PTX® drug-eluting peripheral stent. The new system, which is now available for purchase in the UK, Ireland, Germany, Spain and Italy, provides simple deployment for the world’s first and only approved drug-eluting stent for the superficial femoral artery (SFA).

“Our objective when designing the new handle was to improve accuracy and deliverability on the previous pin-and-pull system,” said Lindsay Koren, global product manager for stent development. “We have not only succeeded in our engineering and production goals, but have surpassed many of our expectations for several of the new features.”

The thumbwheel design features include an ergonomic handle that facilitates single-handed deployment. In addition to the new deployment system, 120 mm length Zilver PTX stents are also now available while all lengths on the new delivery system are now CE marked with a 24-month shelf life.

Dr. Andrew Holden, director of Interventional Services at Auckland City Hospital and associate professor of Radiology at Auckland University School of Medicine in New Zealand, is the first physician in the world to use the new deployment system in his practice.

“Based on my own experience, I’ve found that Cook’s new Zilver PTX deployment system has overcome the challenges associated with the previous system,” he said. “The new thumbwheel system allows for greater control and accuracy making it significantly easier for me to deploy the Zilver PTX stent.”

Use and potential contraindications:  The Zilver PTX Drug-Eluting Peripheral Stent is intended for use in the treatment of symptomatic vascular disease of the above-the-knee femoropopliteal arteries having reference vessel diameter from 4 mm to 7 mm.The use of this drug-eluting peripheral stent carries the risks associated with peripheral artery stenting, including vascular complications and/or bleeding events.

Dr. Holden is a paid consultant to Cook Medical.

About Cook Medical
Since 1963 Cook Medical has worked closely with physicians to develop technologies that eliminate the need for open surgery. Today we are combining medical devices, biologic materials and cellular therapies to help the world’s healthcare systems deliver better outcomes more efficiently. We have always remained family owned so that we have the freedom to focus on what we care about: patients, our employees and our communities. Find out more at www.cookmedical.com, and for the latest news, follow us on Twitter, Facebook and LinkedIn.