Our hearts are heavy as we mourn the passing of our friend and coworker. On Friday night, Bill Gibbons, our vice president of engineering, and his daughter were involved in a plane crash in eastern Tennessee. Bill was 45 and his daughter, Abbey, was 15. 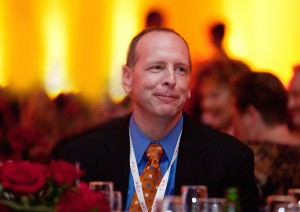 “Bill was the head of engineering at Cook. But he was much more than that,” said Pete Yonkman, president of Cook Group and Cook Medical. “He was our friend and he was a true believer in the power of good science and good engineering. Those around him felt his passion and were inspired to do more than they thought possible.”

A member of the Cook Medical family since 1999, Bill began his career with us as an engineer at Cook Winston-Salem, our facility in North Carolina where we develop and manufacture endoscopy and gastrointestinal endoscopy devices. His leadership skills were evident from the time he joined us, so in 2002, we asked him to lead Cook Winston-Salem as president. Bill then moved to Bloomington with his family in June 2009 to become global vice president of engineering for Cook Medical.

“People looked to Bill when they couldn’t solve a tough challenge or when they were just having a bad day. The people who counted him as a friend and mentor are too numerous to list. It’s impossible to measure the positive impact a person like Bill has on an organization,” said Yonkman.

Memorial contributions can be made to Middle Way House, Community Kitchen and Water for Children Africa.